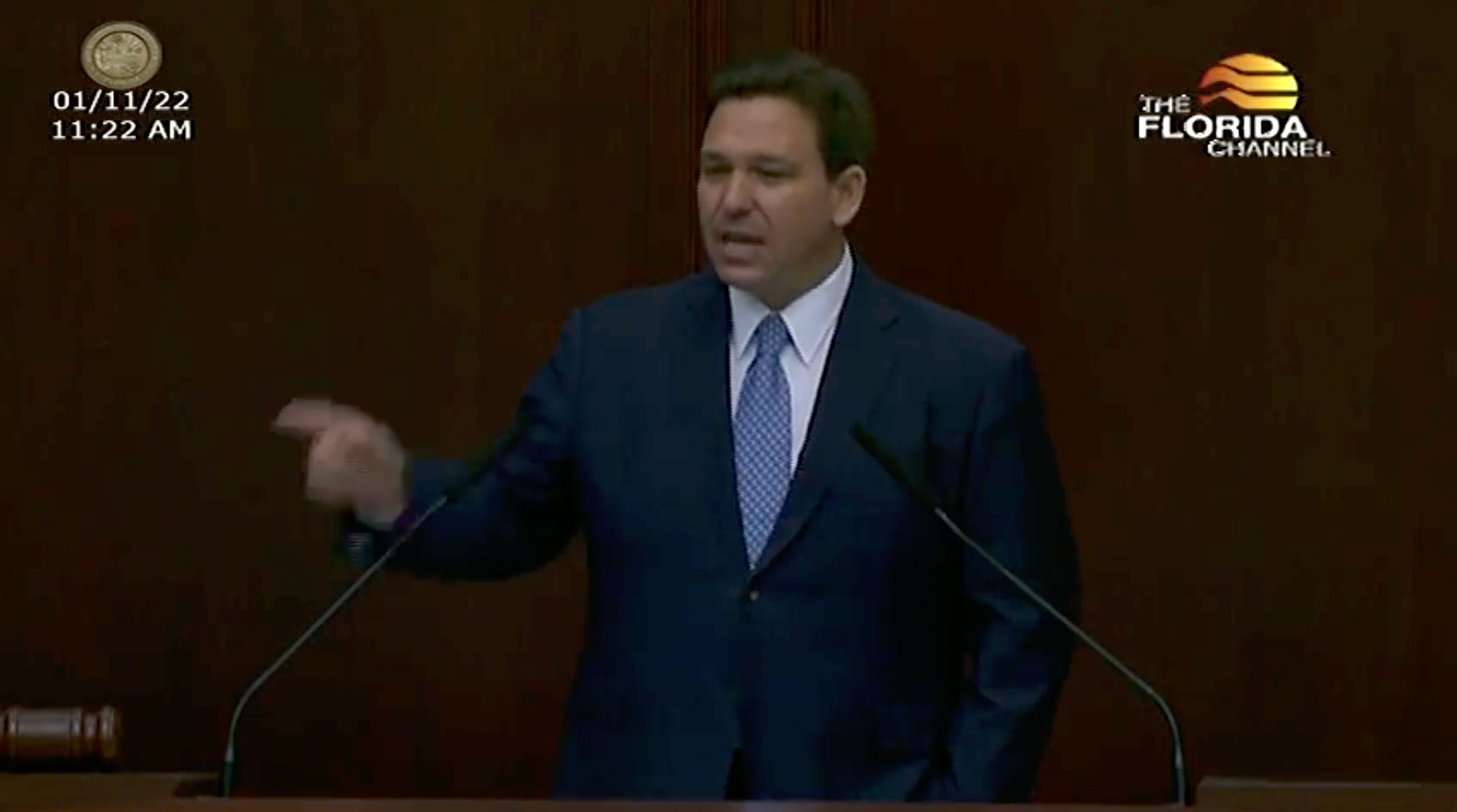 GAINESVILLE, Fla. – In his State of the State address Tuesday in the Capitol, Gov. Ron DeSantis laid out a red-meat 2022 legislative agenda on crime and immigration, and he ridiculed COVID-19 restrictions in other states as ineffective and anti-American.

DeSantis, a Republican who is seeking a second term in November and hasn’t ruled out a White House bid in 2024, called Florida the “freest state” in the U.S.“Florida has become the escape hatch for those chafing under authoritarian, arbitrary and seemingly never-ending mandates and restrictions,” he told a packed and largely maskless House chamber in Tallahassee during his 33-minute address.

DeSantis said school closures have been reckless, politically motivated, and hurt students, and he cited job losses the governor blamed on mandates that he complained have denied Americans freedom because of a “coercive biomedical apparatus.”These policies, DeSantis said, are grounded in “blind adherence to Faucian declarations,” a reference to Dr. Anthony Fauci, the chief medical adviser to President Joe Biden and formerly a top adviser to presidents since 1984, including President Donald Trump. In December, DeSantis’ campaign emailed a fundraising plea for Fauci to be jailed for what DeSantis said was misleading testimony to Congress.

Democrats accused DeSantis of stoking fear ahead of this year’s election.

In Florida, the governor said the state has fought back against what he called unconstitutional restrictions, protected citizens’ right to earn a living wage, given businesses the ability to prosper, and ensured kids have an opportunity to thrive. DeSantis said his legislative agenda this coming year includes:

The governor’s proposed budget, the “Freedom First Budget,” amounted to $99.7 billion, paid for partly with a windfall from the federal government. He noted more than $15 billion in reserve, a historically large surplus.Included in the budget proposal is $22 million for COVID-19 response efforts. DeSantis said the country is facing economic problems that stem from “reckless federal policies,” and he blamed Washington for rising inflation that he said takes money out of the pockets of Florida families.

In their official response to the governor’s speech, Democrats noted that more than 60,000 people in Florida have died from COVID-19.

“What we don’t need is to create more fake boogeymen,” said Rep. Evan Jenne, D-Hollywood. “There’s already enough fear and anger in our society, we don’t need our elected leaders making it worse.”

Jenne added: “We don’t need the third-largest state in America to devote its entire legislative session to making sacrifices at the altar of political ambition for any one individual.”DeSantis said his proposed gas tax holiday would help economically strapped residents, although he did not offer details of the program.

“If Washington, D.C., won’t change course,” the governor said, “then we have a responsibility to step up on behalf of Floridians.”He also said that because of his decision not to lock down the state during the coronavirus, Florida is leading the nation in new business creation, which has increased by 61% since 2019, according to the governor. DeSantis noted that in 2021, Florida saw 114,000 more new businesses than California, despite it having a population that is substantially larger.

“Freedom works,” DeSantis said. “Our economy is the envy of the nation. And the state is well-prepared to withstand future economic turmoil.”

The governor also criticized the federal government’s handling of immigration, which he referred to as “lawless open-border policies,” and he proposed measures to stop federal agencies from flying in immigrants illegally in the U.S. to Florida. DeSantis said they should be rerouted to what he described as sanctuary states.

He derided “soft on crime prosecutors,” saying, “Florida is a law-and-order state.”DeSantis also recognized his wife, Casey DeSantis, who was in the visitors’ gallery. Like most in the chamber, she was not wearing a mask. She is recovering from breast cancer after being diagnosed in October. DeSantis said he was accompanying her after Christmas to her cancer therapy. He predicted she will be cancer free by the end of the year.

DeSantis noted the Surfside condominium collapse last June and praised first responders and recognized family members of one victim who attended the speech. He said Florida should fund a memorial, but he offered no plans for preventing another such tragedy.

In November, DeSantis will run for re-election as governor against one of three candidates vying to be the Democratic nominee: Agriculture Commissioner Nikki Fried, Rep. Charlie Crist, D-Fla., and state Sen. Annette Taddeo, D-Miami.Fried, in an interview, said DeSantis is forcing his own beliefs on the people of Florida, and is not being transparent enough to Floridians about his plans for the years to come. “His attempts to run for president of the United States means that he no longer is caring about the people,” she said. “He wants to use the people of our state as his own tools to get to the White House, and it's really up to the people of the state to stop him.”

DeSantis did not mention Biden or Trump in his remarks.
___

This story was produced by Fresh Take Florida, a news service of the University of Florida College of Journalism and Communications. The reporter can be reached at